On 18 May, only the Retiro Park venues, the Palacio de Cristal and Palacio de Velázquez, will be open.
Organised by
Museo Reina Sofía
With the sponsorship of
Estrella Damm

In conjunction with International Museum Day, access will be free of charge on Sunday, 16 and Monday, 17 May. Book your free general admission here.

Once again, the Museo Reina Sofía participates in the annual International Museum Day —celebrated internationally since 1977 — under the 2021 slogan proposed by ICOM (the International Council of Museums) of “The Future of Museums: Recover and Reimagine”, and thus prompts a reconsideration of the idea of a living, open institution.

The notion of historical time as a dizzying, sped-up line of progress towards the future, and questioned by the current critical conditions and the perception of time at a standstill and repeated, forces us to rethink the meaning of museums, and their role, scale, evolution and future in order to deal with present-day challenges. Learning from other world views, those which conceive of a cyclical, spiralling time in which the past is ahead and the future is behind, contributes to a re-examination of where we are situated and the paths to imagine.

Therefore, in conjunction with International Museum Day, the Museo offers two days with free entry, on 16 and 17 May, in addition to a special programme of encounters, a film series, interventions, activations and guided tours.

In turn, the Museo once again joins Radio 3 to celebrate the day, offering, on Monday, 17 May, part of the station’s schedule from the rooms of the Collection. 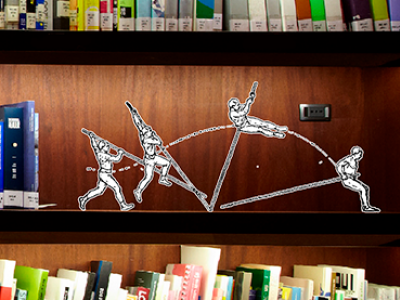 Actividad pasada Monday, 17 May, 2021 – 12pm and 5pm
The Permanence of the Ephemeral. Documentation Around Performance

The Museo Reina Sofía Library and Documentation Centre organise an encounter that gets under way with a guided tour around their facilities, showing the different services on offer to visitors and presenting a selection of different materials from their artistic holdings, materials used to document performance art. The ephemeral, fleeting and short-lived nature of performance actions means that faithfully recording them presents a challenge for artists, institutions and publishers alike. Therefore, this activity sets forth a reflection and debate on the recording and archiving of these formats.

On the basis of these materials and in order to delve deeper into this problem, the encounter concludes with the collaborative action Añadir contacto (Add Contact), whereby the protagonists are the same attendees in the encounter. The action draws inspiration from a collaborative performance from Andrés Senra that took place on Facebook and subsequently materialised into an artist’s book. 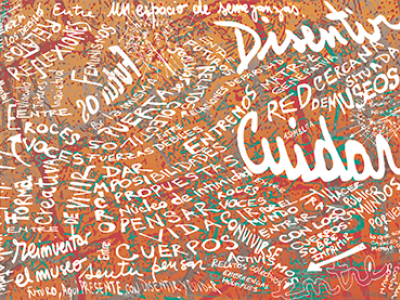 For decades now, the present and future of museums has been the source of perpetual public debate, in all likelihood on account of their capacity to configure narratives of collectiveness and conceive of new worlds. As a result, a large part of the tensions caused by culture wars crystallise in museums and stem from conflicts of economic, political and sensorial interests that cut through their foundations.

The debate today around their meaning, role, scale, evolution and future has intensified, to the extent that thinking about their legitimacy has become a question of survival. This encounter includes the participation of people involved in an array of museum institutions and situated in different contexts to share their experiences and projects. 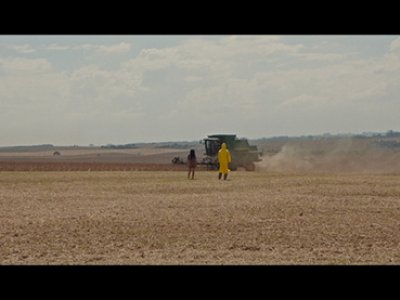 Actividad pasada Sunday, 16, and Monday, 17 May 2021
Possible Futures. Cinema and Worlds to Come

This audiovisual series pivots on cinema’s future imagining with films made between 1920 and 2020, an historical expanse of one hundred years in which the future is manifested as an idea disputed between progress conceived as dogma, a radical critique of the present, and a yearning for new worlds. What are the imagined futures in the past and which future is projected and desired in our present?

―With a video presentation by Anton Vidokle

Free, until full capacity is reached, with prior ticket collection on the Museo Reina Sofía website from 10am on the last working day before the activity. A maximum of 1 por person. Doors open 30 minutes before screenings.

Three centuries on from the birth of Francisco Sabatini, the architect behind the building that housed the former Hospital General de Madrid — Madrid’s General Hospital — and today the site of Museo Reina Sofía, this project of grand modernity which primarily sought to care and heal is substantiated. In their desire to evoke the original architecture and imagine possible responses to present-day challenges, the actions here are set out in two of the Museo’s spaces, shining a light on two temporal and typological conceptions of the architecture that co-exist inside: 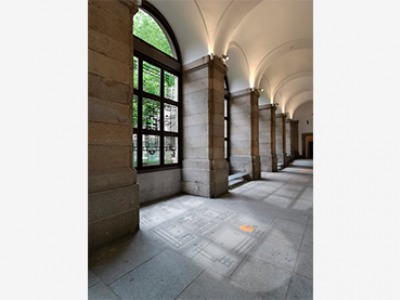 This small show occasions a reflection on the infancy of the building from the perspective of the architecture, illustrated through plans of the eighteenth-century hospital displayed on the windows of the cloister on Floor 1, and thereby restoring a project of great architectural ambition and modernity, a project which, upon completion, would have constituted one of the largest hospitals in Europe. The plans bear witness to the colossal scale of the original project, of which only a third was ever built. Three centuries on, the updated value of these documents functions as an archaeology of the present, inside a context in which the role of the Museo is once again aligned towards care. 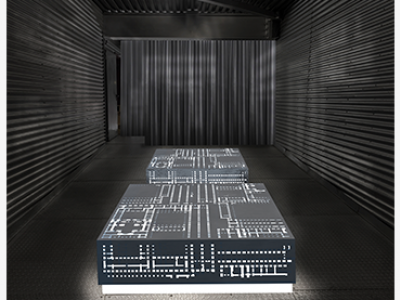 Actividad pasada Nouvel Building, Roof
Museums that have never been. The architectural transformation of the old hospital into a cultural space

This intervention brings back the space of original circulation in the interior of the Nouvel Building roof for the public. Inside this space, visitors can discover the architectural transformation of the old hospital into a museum by way of a sound installation with recordings that reproduce the voice and testimonies of professionals who have been decisive in fashioning the building’s identity and were key to its conversion into a museum in the 1980s, either in its creative genesis (via projects that never materialised) or through contributions to its execution. In the 1980s, considerations revolved around how to put the former hospital to use; today, the same reflection leads us to imagine the nature of the Museo’s next architectural intervention. 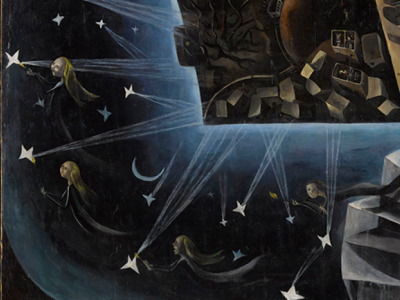 Actividad pasada Sunday, 16 May 2021 – 11am to 2pm
Torchbearer! Family activations in the rooms of the Museo

This proposal involves a series of actions and accompaniments in the rooms of the Museo that spark the curiosity of the youngest visitors. Rather than responding to a set itinerary or shaping a standard guided tour, these activations, spread out on Floors 1 and 2, as well as other spaces such as the Garden, illuminate different works in the Collection through an enquiring gaze.

Subject to the Museo’s general admission

Registration method: this activity does not require prior registration. These are sporadic actions that happen in the rooms of the Museo and have no fixed sequence.

Actividad pasada Sunday, 16, and Monday, 17 May 2021
Guided tours to exhibitions and to the Collection

Registration method: only for one-hour visits and carried out at the Meeting Point, by strict order of arrival, from 30 minutes before the start of the visit. 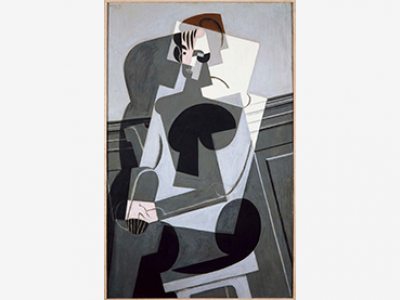 The Restoration Department organises a visit around its workshop to offer insight into the restoration process on Juan Gris’s work Portrait of Madame Josette Gris (1887–1927) from the Collection.

One of the Department’s restorers will offer an in-depth explanation of the different analysis methods used in the intervention, as well as the processes that have been carried out in order to conserve the work properly. For instance, they will describe the gigapixel studies with visible light, raking light and ultraviolet light, and infrared digital photography — technology which enables digital high-resolution images to be captured, outlining details that cannot be picked up by the naked eye — methods that have contributed invaluable information to gain extensive knowledge of the work. It has also enabled the undertaking of adding reversible elements to the frame, granting prior and subsequent protection of the paint, with a temperature control system and relative humidity, which will be vital when moving the painting in the future.

Department of Conservation and Restoration, sponsored by the MAPFRE Foundation

Free, until full capacity is reached, with prior registration at the Sabatini Building information point. 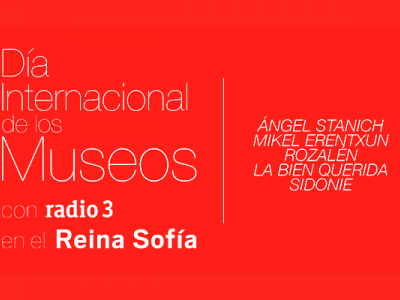 The Museo Reina Sofía once again joins Radio 3 to celebrate International Museum Day. On this occasion, Room 207 will play host to a series of live performances which will be streamed live and direct on the Radio 3 website. The programme includes participation from Ángel Stanich, La Bien Querida, Mikel Erentxun, Rozalén and Sidonie.

Free, with individual registration at the Nouvel Patio information point from 4pm on the same day.