Museo Reina Sofía: free, until full capacity is reached, with prior ticket collection on the Museo Reina Sofía website from 10am on the last working day before the activity. A maximum of 1 per person. Doors open 30 minutes before screenings.

The second session of the Programme 4. All Divided Selves is postponed to Monday 21, June

Luke Fowler has unfortunately had to cancel his trip to Madrid due to last-minute health issues. Therefore, the in-person introductions will be replaced by video introductions.

Museo Reina Sofía and Documenta Madrid, an international film festival promoted by Madrid’s City Council, present a retrospective on Luke Fowler (Glasgow, 1978), a celebrated British artist, film-maker and musician. Nominated for the Turner Prize in 2012, Fowler explores the relationship between subject and archive, memory and history through the possibilities afforded by experimental cinema.

Encompassing short-, medium- and feature-length work that explores the border region between documentary and experimental film, Fowler’s cinema oeuvre is best described as a form of deeply unconventional portraiture. The experiences of his equally unorthodox subjects are tapped into via carefully compiled audiovisual snippets of their lives, endeavours and surroundings, which Fowler edits together on shimmering 16mm with a sense of openness and rhythm second to none.

Cultural outsiders or figures seldom given the spotlight are Fowler’s favoured choice of subject, whether filmmaker and poet Margaret Tait (Houses (For Margaret), a female photography collective from Leeds (To The Editor Of Amateur Photographer), unorthodox psychiatrist R.D. Laing (All Divided Selves), the remote communities of the Scottish Highlands (Depositions), the unseen residents of a Glasgow tenement (Anna, Helen, David and Lester) or even his own mother (Mum’s Cards). His compassionate portraits aim more at generating sensation or mood than completeness or linearity, taking their bearings from the spaces these diverse individuals spent their lives in and the materials they collected (or have had collected on them) over time. If every person leaves traces, whether textual, pictorial or audiovisual, Fowler is their thoughtful, tender archivist, bringing them into gentle, never constrictive alignment so that their multiple subjectivities, materialities, temporalities, ambiguities and underlying ideologies are on clear display; his use of 16mm, itself a process of capturing traces, makes perfect sense to this end.

Given Fowler’s own successful musical career, it’s unsurprising that music and sound form another integral part of his filmmaking, which is always as much an exercise in listening as it is in seeing. Musicians, often outsider figures too, are frequently at the heart of his films as such, including gay electronic music pioneer Martin Bartlett (Electro-Pythagoras (a Portrait of Martin Bartlett)), New England based composer and lecturer Christian Wolff (For Christian) and British sound artist Sue Tompkins (Country Grammar (with Sue Tompkins)). In addition, the enveloping soundscapes and musical accompaniments that form an integral part of Fowler’s work are often forged via direct collaborations with sound artists, composers and recordists, such as Lee Patterson (A Grammar For Listening – Part 1), Eric La Casa (A Grammar For Listening – Part 2) or Toshiya Tsunoda (A Grammar For Listening – Part 3, Cezanne).

The starting point for the retrospective is the Spanish premiere of Fowler’s most recent short film Patrick, which encapsulates many of the formal approaches and thematic concerns that run through his oeuvre. This 21-minute portrait of gay San Francisco disco artist Patrick Cowley, a further pioneer of electronic music who died of AIDS in 1982, explores his legacy in typically shifting fashion, interrupting interviews with his contemporaries and shots of promotional materials and correspondence with luminous, impressionistic fragments of the California landscape and cityscapes that he called home, all tied together by Cowley’s own propulsive sounds.

As sound and image are inextricably intertwined in Fowler’s films, perhaps their most defining formal characteristic is their rhythm, which emerges from the soundtrack but is not restricted to it, as Fowler’s singular grasp of editing creates patterns and pulsations all of its own, a twitchy, hypnotic, intensely corporeal feeling that dovetails with his restless curiosity for those he crafts portraits of. Perhaps one of the opening lines from Electro-Pythagoras (a Portrait of Martin Bartlett) thus offers the best way to describe these unique, delicate combinations of sound and motion, histories and subjects, as the way in which their idiosyncratic approach is brought to bear on the idiosyncrasies of their subjects feels like a whole ethos in terms of form and content alike: “a certain predilection for things out of the ordinary”. 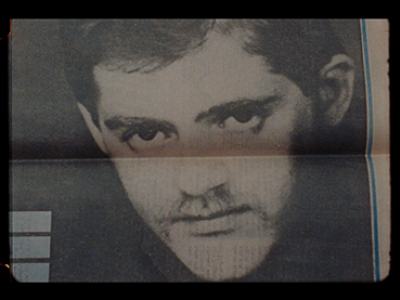 The short film Patrick, the artist’s most recent work and screened in Spain for the first time, shows fragments of the life, not the biography, of electronic music composer Patrick Cowley (1950–1982), a pioneer in the use of the synthesiser in disco, the producer behind anthems such as Sylvester’s You Make Me Feel (Mighty Real) [1978] and the remix of I Feel Love by Donna Summer (1978), and a composer of peerless high-spirited and vibrant tracks that defined that era of unparalleled freedom before the AIDS epidemic hit America’s West Coast. The screening is accompanied by an exclusive lecture-performance: Jorge Socarras, another San Francisco disco legend and friend and collaborator of Cowley’s, will play some musical highlights from the era and talk about Cowley’s legacy, accompanied by new 16mm images by Fowler. 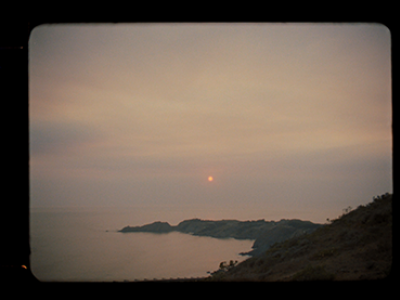 Music making forms an inescapable element of Fowler’s oeuvre, whether as a specific process, a life enterprise, the expression of a countercultural position or some combination of the three. Electro-Pythagoras (a portrait of Martin Bartlett) is a suitably loose-limbed biography of gay Canadian composer and electronic music pioneer Martin Bartlett (1939-93), gliding freely between text, photo and video, salient figures, devices and locations and the personal and the professional, with retro computer graphics, an insightful voiceover and Bartlett’s own music on hand to tie the many moving parts together. For Christian has composer Christian Wolff discuss his compositional strategies in voiceover to free-flowing images of his Vermont farm, while Country Grammar (with Sue Tompkins) interweaves the recording process for the artist’s titular piece shot from countless different angles with sounds and images from Fowler’s own daily life: filmmaker and subject as one. Patrick, screening as a Spanish premiere, marks a return to the biographical, a sunny jaunt through San Francisco and the surrounding landscape in search of the traces left behind by trailblazing disco producer Patrick Cowley, who died of AIDS in 1992, as Fowler encases his pulsating flow of luminous images in Cowley’s sparkling sounds. 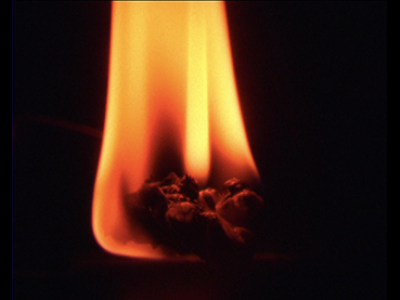 What does it mean to listen? Although many of Fowler’s films pose this question, the A Grammar for Listening cycle places it front and centre. These three collaborations with sound artists—Lee Paterson, Eric La Casa and Toshiya Tsunoda respectively– comprise beautifully enveloping sound and image recordings at various locations, including London landmarks, rural and industrial settings in Scotland and other nondescript markets and parks. Part one labels its different locations and the sounds being recorded there, just as part two withholds the same information, while part 3 puts the act of recording on direct display. Do we read sound via image or is it other way around? And if context shapes perception, when does that become a grammar? Depositions takes the idea of listening in a different direction, compiling a jittery blend of archival footage culled from ‘70s and ‘80s BBC documentaries that illustrates how the communities of the Scottish Highlands were constantly asked to justify their existence, even as their answers were never truly heard. Yet there was so much more to be listened to beyond these banal depositions: the sound of a landscape, of bone cracking in a crucible, of wind and water, of song. 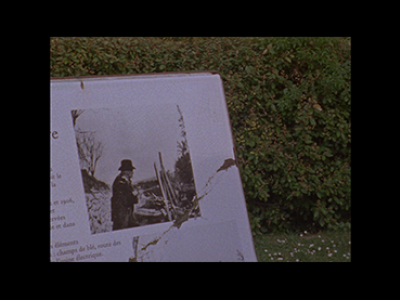 To The Editor of Amateur Photographer (co-directed with Mark Fell)
UK, 2014, colour, original version in English with Spanish subtitles, DA, 68’45’’

―Presented by James Lattimer in the first session

Fowler’s portraiture frequently proceeds by exploring the spaces pivotal to his subjects and the traces and associations they contain. George draws on splitscreen and a piano refrain to take the pulse of the St. George’s Cross area of Glasgow, where Fowler himself grew up. Cezánne approaches the Post-Impressionist master by jumping back and forth between his studio, garden and the mountain that inspired some of his most famous works, while Houses (for Margaret) erects a gentle monument to Scottish poet and filmmaker Margaret Tait by way of her Orkney cottage, the writings it houses and her poem on the concept of home. The collected notes of Fowler’s sociologist mother give structure to Mum’s Cards, the study of a lifetime of theoretical engagement via a desk and all that was written there. To the Editor of Amateur Photographer is a feature-length examination of the history of Pavilion, Europe’s first feminist photography centre that was established in Leeds in 1982. Interviews with the centre’s key players, countless photos taken there and all the accompanying paperwork, harsh electronic crunches and reflections on what it means to make a film about feminism as a man coalesce into a singular portrait of a singular endeavour. 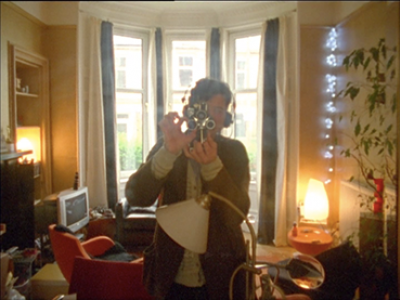 ―Presented by James Lattimer in the first session

The opening quartet of three-minute shorts are flickering portraits of the titular people who each live in the same Victorian tenement in Glasgow, none of whom are ever seen. Their lives are conjured up instead by shifts in light, views out of the window, textures, shapes and patterns and any number of books: four distinct individuals shaped by the same divided up space. All Divided Selves, which landed Fowler a nomination for the prestigious Turner Prize, is a frenetic, collage-like biography of famed Scottish psychiatrist R.D. Laing. Fowler draws on Laing’s countless appearances on UK television and radio to this end, combining this ample archive material such that chronology is irrelevant and repetition more than permitted. The idea is convey the protean Laing’s position within society: a foreign body jutting out of an establishment just waiting to chew him up and a node through which all the primary movements of the period flowed. Fowler’s own 16mm footage is spliced into these past images with spasmodic glee, taking up their motifs at times but also diverging from them at will, thus producing the sort of stream of pure sensory experience that Laing himself sought to grasp: form and content ravishingly intertwined.