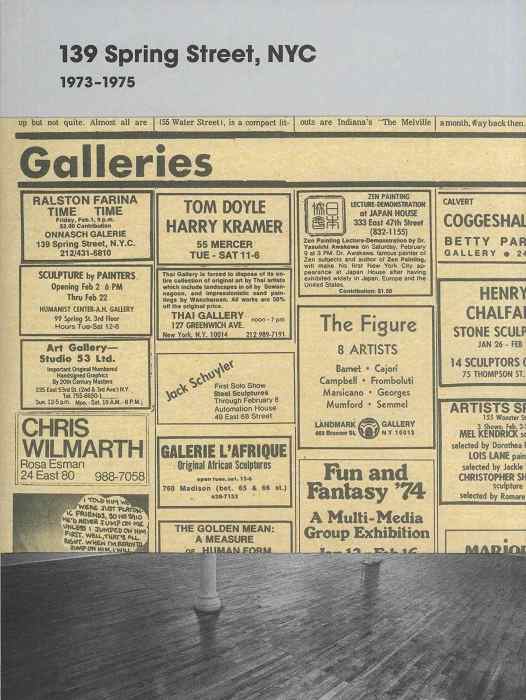 1973: the Onnasch Galerie is the first European gallery to open its doors in Manhattan's SoHo district. As the former industrial area takes on the role of an international art hub, the short-lived Onnasch Galerie makes its own mark at 139 Spring Street. Established by Berlin-based collector Reinhard Onnasch as a sister gallery to his main space in Cologne, and directed by Hildegard Lutze, a flamboyant cross-Atlantic figure, the Onnasch Galerie hosts Gerhard Richter's first solo exhibition in the United States, as well as George Brecht's last in the country. It exhibits works by Elaine Sturtevant, Bill Copley, Edward Kienholz and Gianni Piacentino and presents performances by Jack Smith, Robert Watts, and Ralston Farina, among others. Yet the gallery closes after only 19 months. And in the absence of an archive, the space leaves almost no trace of its existence or activities.

This volume-the result of intensive research-sheds new light on the all but forgotten Onnasch Galerie, documenting its exhibition and performance program via art reviews, essays, flyers, and previously unpublished photographs, as well as original interviews with Peter Frank, Larry Miller, Marc Siegel, and the gallery's former co-director, Marianne Barcellona. It reveals the Onnasch Galerie as reflective of the SoHo of the early 1970s: an active blend of the established and the experimental, the commercial and the non-commercial, of the exhibition crowd and the performance art scene.

Buy 30€
Also available in: La Central Bookshop, the Palacios y Museos Shop and the Ministry of Culture and Sport Bookshop.
Check in the Library